NEW YORK, Sep 9, 2005 – Living my first day as an attendee of New York Fashion Week is some initiation which, because I am familiar with European-based fashion circles, raises new questions about how you are supposed to show and sell the fashion pieces you create on both sides of the Atlantic Ocean.

Talking about organization, professionalism really rules here: we got our credentials to access the tents in no time, the PR and security staff there being extremely polite and efficient, everything goes smoothly. Yet, respect to Paris -and this could also just be because Julien Fournié and I are brand new here- we can feel the lack of a certain je ne sais quoi, which could be called human warmth, personalization, conviviality.

How do you access shows, for instance? You must, in most cases, go through some PR assistants who give you your seating assignment and then you have to declare your name and media title, whereas you could expect to be recognized or to get a word about what you just published for instance, once identified. None of these here. Efficiency rules and it can sometimes be at the expense of forgetting the human being behind his role.

Then you are guided through a series of waiting areas, for which I haven’t understood the reasons yet… Could there possibly be a sort of time when the rope could be open, from the first waiting line to the entrance of the venue?

But these are minor details. The main difference I see lies in the shows’ dramatization. I know that the so-called MTV culture is certainly much more present here than in Europe and that it has greatly influenced our attention span. Still, I don’t think this means that only the first looks are important in a runway show.

With the notable exception of Kenneth Cole on this opening day, all the other shows I have seen were, in my eyes, lacking a well-built story. When the climax of the show is just in the first five opening looks, it means the show fails at managing its audience. This could partly be because each show seen here so far seems to be a mixture between a trunk show and a presentation where image brand comes first.

I think designers in Paris conceive it all in a different manner and do not necessarily plan to show the season’s best sellers on the runway but to propose a universe, a flavor, a story for their brand. A good fashion show, according to French criteria, should tell a story, give a designer’s vision in a global show that should be pertinent, dramatized and have a beginning, a middle and an end… and a climax, which I would place, in most cases, after three quarters of the show have already been seen.

The shows we have attended yesterday were not built that way at all, again with the notable exception of Kenneth Cole who told a “story.” They were mostly showing the pieces that would sell and define the collection in their first five looks and the rest seemed less important, like a first strong continuous note that would extend all the way to the curtain call.

There were attempts at dramatization, but realized in a very clumsy manner. Take the Gottex show, for instance: the first looks were really great, the Latino-Carribean inspiration was perfectly tuned to the season, and the styling with some girls carrying fruit baskets was original. Even the big prints swimsuits were bright. But the pieces designed for the runway – those that will not be found in the shops – seemed to me like DIY. Absolutely unwearable and badly realized long gloves with huge bands linking both arms, last-minute stuck-on black feathers and a piece consisting only of badly placed elasticized bands really did not make up for a climax.

The last golden look with gold make-up all over the girl’s body was vulgar and certainly not giving the right image for a collection which had started in a much classier manner. I saw no dramatization or story either at Naeem Khan or Esteban Cortazar, except maybe with the latter taking his bow… But should really the strongest image for a collection be the designer’s picture?

In the evening, even the designers selected by GENART to show at the Manhattan Center were lacking structure in their individual presentations, with maybe one exception: Borne.

I love exceptions and I am looking forward to be proven wrong once more in the coming days and also learning more things about fashion in America. 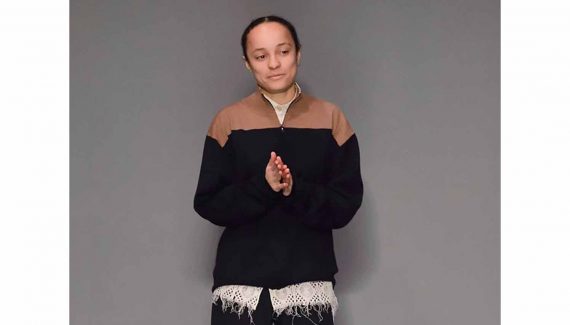