, I just cannot help myself but nitpick and expound on them.

First, I have to confess that I don’t really pay much attention on the titles of the episode, hence I cannot give you the exact titles. No excuse for that except that it’s a bad habit. Second, I don’t remember what season these episodes were aired. My ‘seasons’ are the fashion seasons and that is always what is on my mind. That said, let’s go to the fashion of CSI.

There was an episode where three teens who are fans of a rapper died. The focus of the investigation was based on a poster that proclaimed ‘Dudes Gone Nutz’ superimposed over a photo of macho rapper wearing a bikini.

The crime happened during the MAGIC Show in Las Vegas, wherein one of the employees in the hotel described it as the ‘Biggest fashion show on earth.’ Another character said, ‘Any rapper who is somebody has a label being shown at MAGIC.’

The claim that MAGIC is the ‘biggest fashion show on earth,’ is actually not true. MAGIC is a trade show, wherein catwalk events are also held, but runway shows are not the main attraction!

Now, it can easily be said that it is just a dialog, and not truly an important aspect on the episode per se. Perhaps, ‘fashion show’ here means ‘a show (as in trade exhibit) about fashion.’

Still, CSI is about physical evidence, where everything has to go through a fine tooth comb. Nitpicking on the dialog is well within the premise of the show.

The next episode that mentioned fashion is about two teens who committed suicide ala Romeo & Juliet. Catherine Willows (played by Marge Helberger) noticed that the clothes of the girl are too big for her. It was also something that a girl her age would not usually wear. She then said, ‘I might shop at the outlets, but I read Vogue.’ In the next scene, Nick Stowes (played by George Eads) sees Marge and says, ‘Alright, fashionista.’

There is nothing to nitpick here, just a happy smile from a fashion editor realizing that the term ‘fashionista’ has reached a television show that is as far away from the fashion genre as possible.

The third and last episode is the story about a man who wore corsets. The writers were correct in saying that there was a period when an hourglass figure (a small, nipped-in-look to the waist) was also desirable for men, though generally, corsets were wore by men to slim the figure.

The writers were even correct in insinuating that the corset was worn by men under their military uniforms. Historically, military dress uniforms are ribbed so that it will hold its shape and in turn keep the figure of the wear ‘hold its shape’ also. Of course, this has changed with advances in technology in fabrics.

The nitpicking here is on the time period. History suggests that it was during 1820 to 1835 that this fashion for men occurred. In the CSI episode, the man who wore corset was following an example of on of his ancestors who also wore corsets during the U.S. Civil War, which occurred from 1861 to 1865.

Okay, the writers might have taken a little journalistic license in here. After all, the corset was widely used until the turn of the 20th century. What is amazing here is that currently, a young Parisian corset maker Sylvain Nuffer makes and sells corsets to men.

Nuffer began cutting, stitching and boning corsets for men in 2003 and now sells 30-odd standard models a year at 500 to 600 euros (650 to 775 dollars) a shot, 40% more when made to measure. This might well be underground fashion or a niche market that is lucrative especially with menswear designers trying to identify what will be the next silhouette for men. 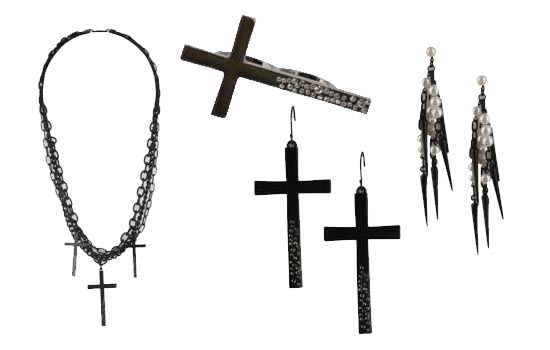